Balikesir, the seventeenth crowded city of Turkey, has a coast of both Marmara and Aegean Sea. Located in northwest Anatolia, Balikesir is bordering Bursa and Kutahya on the east, Izmir and Manisa on the south, Canakkale on the west. Balikesir also known as Mysia and Karesi in history, has been occupied by the Roman Empire, Byzantine Empire, Rum Seljuk Sultanate, Karasid Dynasty, and Ottoman Empire.

The districts that have a coast on Marmara and the Aegean Sea and islands are the main tourism centers in Balikesir. There are many beaches and hotels as well in this region.

There are also many unique natural surroundings and historical places in the Cunda, Altinoluk, Ayvalik, Avsa districts of Balikesir.

Mount Ida: Mount Ida, one of the cozy travel destinations in Balikesir, is lying beyond Canakkale and Balikesir. Karatas peak (1770mt), the highest peak in Mount Ida, is surrounded by unique green forests. You can lose yourself among the many trees such as oak, hornbeam, and chestnut trees.

Akcay: Akcay, 10 km to Edremit, is one of the touristic travel destinations. It hosts many travelers every summer with its proximity to Istanbul.

Altinoluk: Altinoluk, located in the Edremit district of Balikesir, has the second cleanest air in the world. Also, it is famous for its olive trees.

Ayvalik: Ayvalik, which has a coast on the Aegean Sea, is the most important travel destination of Turkey with its historical and natural surroundings. Ayvalik that is famous for its Sarimsakli and Cunda Island, continues to be a frequent destination for the one who wants to buy villas in Balikesir.

Erdek: Erdek, the most developed touristic region in Balikesir, has become the essential travel destination for holidaymakers with its lush natural surroundings and intense blue seas. Erdek is also an attractive touristic destination, that you can enjoy your vacation both winter and summer for the ones who want to buy houses in Balikesir. 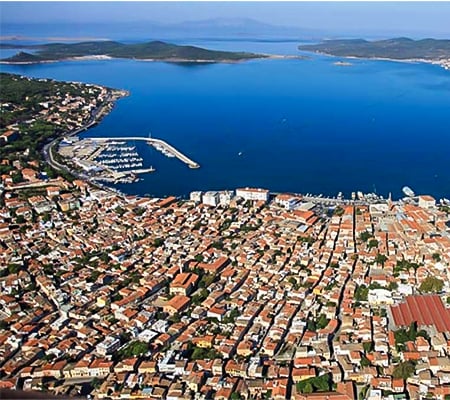 Buy a House in Balikesir

The real estate in Balikesir draws attention to investors with its luxurious real estate projects recently. The prices of the apartments in Balikesir for sale are expected to be increased considerably due to the opening of the schools and universities.

Balikesir, the common point of the ones who want to reside permanently and are looking for the house for sale for summer in Balikesir, offers special opportunities to foreign and local investors who want to buy flats for sale in Turkey.

Buy a Land in Balikesir

The main source of income of the city is dependent on agriculture and livestock. The share of agriculture in economic activities is 49%. On the other hand, 56.7% of the working population is engaged in agriculture. The agricultural land is 510,456 hectares in this city.
Agricultural products such as grain, sesame, poppy, sunflower, tobacco, sugar beet, tomato, and melon are grown in the province generally. Olive cultivation, viticulture, and fishing are carried out in the coastal areas of Balıkesir. Generally, the islands and coastal villages are preferred to buy land in  Balikesir.

Buy a Commercial Property in Balikesir

The ones who want to buy commercial property for sale in Balikesir should look for the central districts.