A senior diplomat from the Turkish Republic of Northern Cyprus spoke to TRT World on the condition of anonymity and said “The issue of Russian planes is a subject that proceeds with backdoor diplomacy... There is an initiative from the Russian Federation on this issue, but we do not know how it will turn out...”. A formal announcement is expected to be made in the following few days.

According to the sources of the media outlet CNN Türk, the debate on direct flights between the two countries is still ongoing. However, the very first direct flight to TRNC airport from Russia is expected to happen on November 15, 2022, on the opening of the new Ercan International Airport terminal and runway. The date also coincides with the 39th anniversary of TRNC’s unrecognized declaration of independence. 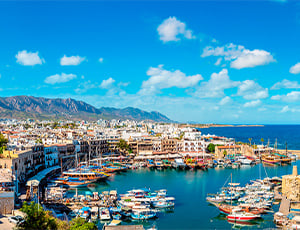 Several political analysts and professors state that the inauguration of direct flights between the two countries and an increase in the attention of Russian investors to North Cyprus is highly possible in light of recent happenings. Buying property in North Cyprus is safe for Russians to settle by purchasing real estate because North Cyprus does not take part in sanctions against Russia.

Ukraine conflict, the sanctions imposed on Russia by the European Union, and the US decision to lift the arms embargo on Southern Cyprus seem to have impelled Russia to revise its approach to the Turkish Republic of Northern Cyprus.

As expressed by analysts, strengthening economic and diplomatic ties with Turkey and the Turkish Republic of Northern Cyprus seems like a convenient option for Russia under said circumstances. These circumstances not only paved the way for a change in the official policy of Russia but also affected the choices of Russian citizens as well.

As Russian citizens do not feel financially safe in the European Union countries or the USA, they started to prefer Turkey and the Turkish Republic of Northern Cyprus for their holidays, to make a real estate investment, or to settle permanently. The last few months have witnessed a tremendous increase in the demand for properties for sale in North Cyprus by Russian investors.

The properties in North Cyprus not only offers comfortable living spaces but also advantageous opportunities to make a profitable investment. International interest and attention in real estate in North Cyprus is steadily growing. The number of Russians who relocate to or buy property in North Cyprus is expected to further increase after President Putin has announced partial military mobilization last week.

With the inauguration of direct flights from Russia to North Cyprus in near future, traveling and buying property in North Cyprus will be a lot easier for Russians.