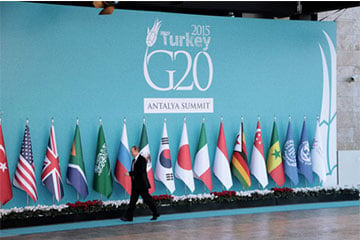 First, G7 Summit was founded with the participation of the United States, Britain, France, Italy, Germany, Japan, and Canada in 1976. After the collapse of the Soviet Russia joined the group and began to call into the G8 Summit. G20 was declared with the participation of other countries that are seen as important for the global economy in 1999. It was first provided accession to the G20 Summit at the ministerial level. After 2008, it began to be made to participate in the president.

The G20 meetings, interviews, and studies were done for increasing international financial stability.

Leaders and teams of the G20 will stay in hotels, hold conferences, sightseeing, golfing and play tennis, as well as use other social and cultural activities. All the activities are continuing with a flurry of like the treatment system improvements, the revision of the way, the environmental organization, and the security checkpoint.

Golf tourism in Belek's famous resort with world-famous guests at the luxury hotels will be honored. Turkish Foreign Minister personally supervised the studies that have been completed in a rapid time frame.

Belek, which is the most beautiful town in the Mediterranean, welcomes around 5 million guests with luxury hotels, golf facilities, clean beaches, and its pristine natural environment. Belek is one of the largest integrated tourism projects in recent years which allows receiving a share of the international tourism market. Belek is hosting thousands of tourists in summer and winter with luxurious resorts surrounded by pine forests which have 60 thousand bed capacities. Belek has about 47 tourist facilities. There is not allowed construction on the coastline except the hotels.

Belek is a pioneer in convention and meeting tourism. Belek, which was hosted many national and international conferences with success until now, is poised to become the world's convention center. There are 204 conventions and meeting rooms that provide an instant translation.