This year was the 23rd Year of the Efes Blues Festival and the first gig of the tour was at the Ramada Plaza Hotel in Antalya, Turkey.

This was the first time the festival has been held there and it served its purpose well enough with the big room providing plenty of space for people to get into the crowd for the party or to hang around at the back dancing round their table of drinks.

The festival followed its usual three act set up by having a solo artist warm up the crowd, followed by two bands to gradually take the blues tempreture up to boiling point. 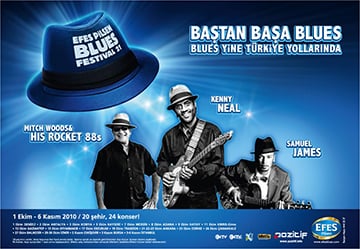 The first act this year was Cedric Burnside. He is actually renowned as one of the world's best drummers and regularly wins prestigious rewards in that field. He is the grandson of the legendary Bluesman R.L Burnside and he certainly carries on the blues tradition but also adds a dash of country, funk and soul to it to make his sound old, yet modern at the same time.

The second act of the evening was Smokin' Joe Kubek & Bnois King who hail from Texas. These two have been together for over 20 years as the seemingly effortless interplay between their guitars amply demonstrates. Smokin' Joe is quite simply an awesome hard rocking blues player while King plays jazzy rhythms and spontaneous solos to compliment Joe quite nicely. King also sings soulful conversational style lyrics while the solid rhythm section keep it all moving along and hanging together very well. They were great entertainment and you could tell they were enjoying their time in front of the Turkish crowd very much also.

The last group of the event were Billy Branch and the Sons of Blues who continued in the vein that Smokin' Joe left with some hard hitting blues but were complimented with a keyboard player and then were joined singer, Zora Young towards the end of the gig.

Initially just the band came on to get into a groove, before Billy joined them onstage. When he did, he took out his harp and began playing some amazing blues harmonica along with the band. He has played with the likes of Willie Dixon, Johnny Winter and Taj Mahal and has received three Grammy nominations and he gave a show that lived up to that billing.

The rest of the band were no slouches either with the bass player, Nick Charles, having played with Howlin' Wolf, B.B King, Tina Turner and even the Rolling Stones. The Keyboard player Sumito Ariyoshi was also great as was the newest member of the band, guitarist Dan Carelli who gave Smokin' Joe a run for his money in the ‘scorching solo' stakes.

The crowd lapped it all up and you can tell that the musicians were really happy to be in Turkey and no doubt looking forward to the rest of the tour.