A Journey to Modern Turkey: One of the Best Places to Live 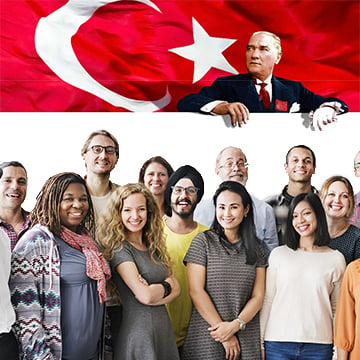 When we look back to history, we’ll see that Asia Minor was home to the greatest civilizations in the world. The most outstanding cultural context of these lands was its cultural diversity and it still bears this feature.

Since the Ottoman Empire, Asia Minor has been an international meeting place for travelers, wanderers, and tradespeople. People from all over the world were eager to experience the enchanting natural beauties or cultural heritage themselves.

It still maintains its importance as the Turkish Republic even today. Turkey is considered one of the top countries for living in because of its peaceful and welcoming culture.

The new Republic of Turkey turned into a modernized nation with the proclamation of the republic on October 29, 1923. Yes, Rome wasn’t built in a day. But how come Turkey has transitioned into a republic this quickly?

It’s because of the advanced development plan, managed and organized by Ataturk in Turkey. Also, government incentives and local support played an important role. This cozy country has become one of the best countries to live in very quickly. In parallel with the revolutionary ideas of Mustafa Kemal Atatürk, the growth of Turkey has sped up in several aspects.

People have gained their independence and civil rights. The public order has transformed into a more modern and civilized western shape.

To raise the lifestyle quality, the country has been populated with an educated labor force. For example, medical officials who have studied western practices abroad have been invited to the country.

The existing working force and government officials have been educated and trained to keep up with the latest innovations. Village institutes were established to promote local production.

These first steps and reforms were made during the early years of the republican period. These reforms have turned the country into today’s modern and educated society. Today; Turkey is a civilized social country that welcomes every individual regardless of religion, language, gender, and race.

An Expat Explorer survey was conducted by the HSBC group in 2019. Turkey is ranked as the 7th country to live and work among 163 other countries after leaving Germany in 8th place. Each passing year, the number of foreigners moving to Turkey to live and work increases with the country’s reputation.

The private sector also has widened its context over the past few years. Recently, the number of private healthcare and education businesses has increased rapidly. These businesses have created new sectors which promote the labor force.

Plus, their low costs and the quality of these services make the education and healthcare system run on all cylinders. Any person living in Turkey can easily access these institutions to support their well-being and educational progress.

Living in Turkey and experiencing a quality lifestyle with European standards is a dream come true for many people. People can benefit from free education in Turkey and high-quality healthcare services. Also, the comfortable living conditions and low costs of living in Turkey make the country a great place to reside.

Not being born within the Turkish borders is not a limitation anymore to benefit from these privileges. The Republic of Turkey has been developed as a social country that aims to eliminate restrictions.

The main purpose of the administration was always to provide equal rights to all human beings. Every individual is treated as equal in Turkey; regardless of their religion, language, gender, and race.

From that point of view, any individual can freely benefit from most of the privileges of Turkey. They can buy a home in Turkey, get an education, invest, live and work comfortably with necessary permits. Becoming a Turkish citizen is also a popular idea among foreigners who choose to live permanently and retire in Turkey.

Residence permits also provide residency in Turkey to foreigners. However, gaining all the rights of a Turkish citizen is also a charming idea. Turkish citizens can travel visa-free to 100+ countries, and take advantage of Turkey’s health benefits.

As the leading real estate company in Turkey, we offer extensive services from buying your second home to getting Turkish citizenship. Get in contact with us today to try out the ultimate Turkish experience in one of the world’s best countries!