Which Cities Are the Most Beautiful in Cyprus?

Lefkoşa, Limasol, Larnaka, Girne, Gazimağusa, İskele, and Paphos are some of the biggest and most beautiful cities in Cyprus. Cyprus is located in the middle of the mesmerizing Mediterranean Sea. So, it’s no wonder Cyprus cities are some of the most popular cities in the world.

However, the major cities of Cyprus are not the only attractive places in Cyprus. There are many attractive and quiet cities and small villages as well.

The less populated cities and villages of Cyprus offer their inhabitants a calm, comfortable, pleasant, and peaceful lifestyle. They also present breathtaking views of evergreen forests, mighty mountains, the stunning Mediterranean Sea, waterfalls, and rivers. Inhabitants of these cities can also explore the rich history of the island by taking a stroll in the archaeological sites.

Let’s look into the best cities in Cyprus and their charms a bit more closely.

Which Are the Best Cities in Cyprus?

Major cities like Lefkoşa, Limasol, Larnaka, Girne, and Gazimağusa are some of the best cities in Cyprus to live. The main reasons for that are the abundance of all kinds of amenities and the beauty of these cities. However, some cities and villages are more popular among different groups of people.

This situation is the result of differences in preferences and expectations. Here are some of the most popular cities in North Cyprus and the reasons for their popularity; 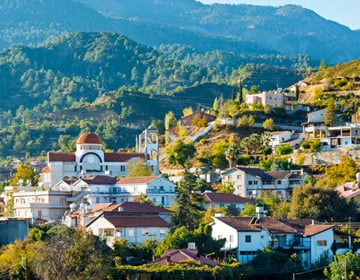 Lefkoşa, also known as Nicosia, is the biggest city in Cyprus by population and is the capital of Cyprus. The city is often regarded as the “last divided capital city in the world”. Lefkoşa is the capital city for both North Cyprus and South Cyprus. For this reason, it’s one of the most developed cities on the whole island.

Lefkoşa accommodates all kinds of daily and social amenities. You can easily find cafes, restaurants and bars, malls, hospitals, banks, cinemas, theatres, museums, entertainment centers, and more options. It’s the best city to stay in Cyprus to explore its rich history and have a fulfilling holiday.

You can also choose to visit the village of Kakopetria in Lefkoşa for a more tranquil holiday. Kakopetria is a small traditional village within the Troodos Mountains. The village providing breathtaking nature views allows you to explore the authentic Cyprus lifestyle.

All these aspects of Lefkoşa also make it a great choice for investing as well. People prefer the biggest city on the island for more opportunities to make a profitable investment by buying property in Cyprus.

Limasol comes second in the rankings of cities in Cyprus by population. It is a bustling city by the sea with a colorful promenade, beautiful beaches, rich history, and plentiful entertainment options. It is one of the best cities to visit in Cyprus because it offers something for everyone.

The entertainment, dining, and sightseeing options on Limasol are unparalleled to that in any holiday resort. It also hosts the largest carnival parade in the island every spring with the participation of thousands. One of the outstanding attractions in Limasol is, once the place of a royal wedding, the Limasol Castle.

Another must see place in Limasol is the town of Pissouri. The coastal town between Limasol and Paphos attracts attention with its laid-back rural lifestyle and untouched natural beauty. The village of Platres is also among the favourite places for day trips. It allows you to escape from both the crowdedness of the city center and the excessive summer heat.

Platres is home to Caledonia Falls; the highest waterfall on the island. The town tucked between the mountains also enchants people with its vineyards, exquisite wines, delicious sweets, and tasty chocolates.

Choirokoitia, also known as Khirokitia, the famous UNESCO world heritage site is also in the borders of Larnaka. You can arrive at the remains of the ancient village in a half hour drive from the center of Larnaka.

The villages of Tochni and Lefkara are among other important destinations for history and culture enthusiasts. As one of the oldest villages in Cyprus, Tochni attracts attention with its authentic atmosphere and traditional houses. On the other hand, Lefkara is known for its beautiful handicrafts such as lace and silverware.

The district of Gazimağusa is considered one of the best cities to live in in Cyprus. It offers something for everyone of all ages. People can enjoy sandy beaches, beautiful nature, a colorful and active social life, and a rich history. There are also many festivals, museums, and water sports activities in here.

Aya Napa (Agia Napa or Ayia Napa) is one of the most popular areas in Gazimağusa. The famous resort town Aya Napa is home to some of the best blue-flagged beaches including Nissi Beach. The captivating natural park Cape Greco is also in the borders of Aya Napa.

Another outstanding place in Gazimağusa is Paralimni. Paralimni is more family friendly and tranquil compared to other parts of Gazimağusa. However, it still offers all the perks of Gazimağusa.

Girne is one of the most popular cities in North Cyprus. It’s described as the tourism capital of North Cyprus. The historical castle and harbor dating back to Byzantine times attract worldwide attention.

Girne also features many golden sandy beaches, fine dining options, active nightlife, and cultural attractions. It’s no wonder that it is one of the most popular cities in North Cyprus. For this reason, Girne features many beach resorts and boutique hotels.

In addition to its historical harbour, Girne has another harbour named Girne Touristic Port. This port is not only the starting point of cruises but also a commercial port as well. Exports and imports of products through marine routes are handled in this port; making Girne a commercial hub as well.

Since Girne is a commercial center, it’s a popular choice for making an investment by purchasing real estate in Cyprus. The three universities in the city also contribute to this situation by causing large seasonal population movements.

Paphos might be the smallest city in Cyprus, however, it’s also one of the most beautiful cities in Cyprus. The city situated on the southwest coast of Cyprus is home to countless beauties including historical sites and astonishing nature.

An impressive port from Byzantine times and Paphos mosaics are some of the popular attractions in Paphos. Also, UNESCO world heritage site the Tombs of the Kings is only 3,7 km from the Old Town of Paphos.

The coastal town Peyia in the Paphos District is also one of the popular attractions. Peyia is filled with pristine blue-flagged beaches such as Coral Bay. You can also choose to relax in the small village of Ineia while gazing upon the breathtaking views of vineyards.

İskele is another popular city in North Cyprus and also an important tourism center. The historical landmarks here draw the attention of thousands every year. Some of them are the Church of St James from the 15th century and the Church of Panagia Theotokos (Blessed Virgin Mary) from the 12th century. Kantara Castle is also a popular attraction.

Additionally, İskele is home to countless entertainment options and hosts numerous festivals and carnivals with the participation of thousands of people. On top of it, these activities are accompanied by fine dining options. Especially, the beach area is filled with many luxurious restaurants, cafes, and bars.

Another reason for the city’s popularity is the abundance of modern real estate projects. Now is a good time to buy house in Cyprus. The demand for houses with sea views in İskele is constantly rising. Construction companies are starting new projects to meet the demands.

Hopefully, this brief article has been helpful for you to find the best city to live in in Cyprus. If you’ve decided on which city to live in, check out our properties in Cyprus to find your dream home.