Antalya Homes has many real estate for sale in Lara, Antalya, Turkey. You can easily find real estate in Lara for sale, apartments, houses, and land sales in Lara.

Antalya is a Turkish city lying on the southwest Mediterranean coast. As of 2011, the city is the third most popular and visited the city. Antalya is also known as the biggest international sea resort in Turkey. The city features many natural coastal sites. It is surrounded by mountains on three sides and has a coastal boundary on the fourth side. 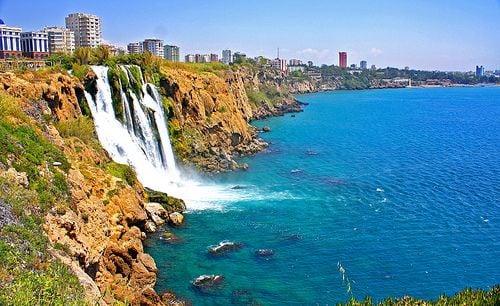 The city's first construction dates back 3rd century BC according to recent excavation. The city was chosen as a naval base by King Attalos II of Pergamon for his powerful fleet. Later the city (known as Attalia back then) became part of the Roman Empire in 133 BC. The city has seen many rulers of different religions. Before the 1970s, the city was not very modern. It was more of a picturesque pastoral town. However, development began due to an increase in tourism. It is now the most happening coastal city of the Turkish Republic.

Lara is a district of Antalya city. This district holds the longest stretch of sandy beaches in Turkey. Lara in Antalya, like the rest of the city, has a very moderate climate throughout the year. The summers are hot and dry and the winters are rainy and mild. June and July are the hottest months with the temperature of the city rising up to 45°C. The city features sites from different eras and cultures letting tourists know about the diversified culture of the city.

The word "Lara" means "sand" in ancient civilization Hittite language. The place has probably taken its name from its long sandy beaches. Lara in Antalya is famous for its sandy beach. There are many luxury hotels in the district. The hotels are most 5-star or 7-star and are mainly in the Kundu area. It may seem difficult to buy property in Lara but it is not impossible. There are houses, villas, apartments, and lofts available for sale close to the beach. The prices of property in Lara for sale; are comparatively higher than other suburbs in Antalya. The reason is very simple: the city is a major tourist attraction and Lara Beach is particularly popular among the masses.

The properties provide residents with an amazing view of the beach and also that of the hotels. With so many 5-star and 7-star hotels nearby, the residents can easily find many different facilities, like restaurants, gyms, swimming pools, and many other amenities within a short distance. Most real estate in Lara features amenities like swimming pools, saunas, and fitness centers, and children's playgrounds within the vicinity.

The hotels built in Lara are unique. Each hotel's architecture is a replica of famous places from around the world. Owning a property in Lara is a very good investment opportunity. It does not matter what type of property you buy, all real estate developments in Lara are close to the beach and can be reached within a few minutes. Shopping centers are also close to the properties. In other words, Lara is like a metropolitan area where everything is accessible. People do not have to worry about anything. With the beach at walking distance or a short drive away, the area is ideal for investing.