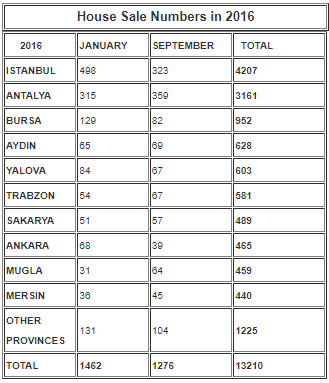 House sales numbers to foreigners by nationalities until September 2016 according to the General Directorate of Land Registry and Cadastre; shortly called TKGM (Tapu ve Kadastro Genel Müdürlüğü)In general, foreign sales numbers shared in newspapers and television news do not reflect the real situation. This data is based on the fact that the buyer of real estate has a foreign passport, but the buyer might be a Turkish person living abroad. The General Directorate of Land Registry and Cadastre categorizes buyers according to the buyer's nationality on a given identity document. Therefore, these numbers show that thousands of Turkish people, who have foreign passports, buy properties in Turkey. That’s why foreign property sales statistics provided by the General Directorate of Land Registry and Cadastre do not show the real number of foreign sales.

For example, land sales to foreigners are very rare. Because foreigners prefer to buy ready houses and apartments instead of buying land in a country they do not know. The number of foreign investors who invest in land is even less than 1%. According to the data of the General Directorate of Land Registry and Cadastre in 2014, 1664 units of land were sold to the Germans. However, the actual sales were made to the Turks living in Germany. In 2014, 973 homes were sold to people with a German passport. We estimate that half of this figure was formed by Turks who live in Germany and the other half was formed by native Germans. The data to support this theory can be found in the sales statistics for 2016 (January-September).

The main reason for this mistaken data is European politics for Turkish people living in their countries. The double passport (or nationality) is mostly not allowed, in such countries as Germany, England, Denmark, France, and the Netherlands where lots of Turks live. Due to necessity, Turkish people use German, English, Dutch, or Danish passports when buying a property in Turkey.

In the first 9 months of 2016, there were 524 property German buyers according to TKGM data. The year began with an attack on German tourists in January, continued with bomb explosions and terrorist incidents. The sphere is also demotivated by the Rising European political opposition against Turkey. There were very few German tourists and property buyers in the property market. It is optimistic to believe that 524 houses are sold to native Germans. Almost all the building land was purchased obviously by the Turks with German passports.

There are still few Europeans who buy property in Turkey. In our opinion, European media tries to exaggerate news about Turkey. It is very common for us to hear every day negative news about Turkey in European media. The truth has a bad habit that comes one day obvious. However, there are a lot of tourists who came to Turkey many times. They know the truth and love Turkey. Therefore Europeans didn't stop buying property in Turkey. 2016 has been a fallow year for Turkey. In 2016 Europeans once again saw that there is no alternative to Turkey in the tourism sector. Spain and Italy make upset holidaymakers this year. Because these countries are expensive and do not like tourists. Greece, on the other hand, did not make holidaymakers happy because of the low-quality hotels. North African countries didn't make tourists happy. They welcomed tourists with overcrowded hotels, offered low-quality service and poor facilities

The year 2017 will be a year both Russians and European tourists flow to Turkey. Turkey offers the best quality accommodations in the Mediterranean with Turkish hospitality. Especially Antalya is linked to every city in Europe with daily flights.