Restoration of St. Nicholas Church in Antalya Demre is Near End 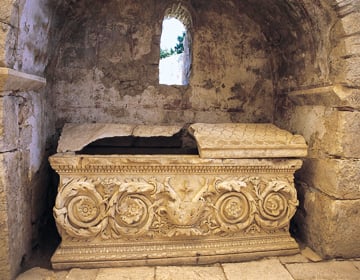 The restoration works are being accelerated so that the church will be completely ready for visiting and pilgrimage before St. Nicholas Day on December 6. The famous church has significant importance as a historical landmark and is one of the good reasons to visit Antalya. It’s also a pilgrimage site for Orthodox Christians and especially for Russians.

The significance of the church comes from its history as well as from the tales of the wonders of St. Nicholas.

Why is St. Nicholas Church So Important?

St. Nicholas Church that is built in the 5th century is important because it’s believed that St. Nicholas rests in eternal peace here. The tales and the stories passed down through generations on the deeds of St. Nicholas have made him an important figure and his resting place a sacred site for Eastern Orthodox Christians and Roman Catholics.

The narratives surrounding St. Nicholas are countless and tell numerous different stories. Some of these include giving out dowries for the daughters of poor families, saving misjudged innocent people from prisons or even the death penalty, rescuing abducted children, saving storm-tossed mariners, and in some stories even reviving some boys murdered by an innkeeper.

Despite the differences in the stories, one point is common: helping out people in need. Carried out by sailors, the stories of his favor and protection became well-known throughout the world. Some call him Saint Nicholas, some Sint Klaes, some Santa Claus, and some Wonder Worker. Despite the differences in naming, millions of people from all around the world come to his eternal resting place to pray.

St. Nicholas Church Throughout History: The Destination of Russian Pilgrims in Antalya

The church’s known history dates back to even before the 4th century. The present-day church was built approximately in 520 on the foundations of an older church where St. Nicholas had served as a bishop. Just like many ancient buildings in the Mediterranean Region, the basilica church got destroyed and restored several times due to weather, earthquakes, floods, and wars.

Major rebuilds of the church include the ones ordered by Constantine IX in 1043 and Tsar Nicholas I in 1862 because of its importance for Roman Catholics and Eastern Orthodox Christians. In addition to the restoration of the original structure, Tsar Nicholas I ordered the building of a tower and some smaller changes in its architecture.

Repeated flooding caused by the Demre River eventually buried the church and its surroundings several meters underground. The church was re-discovered again in 1956 during the excavation near the main square in Demre and later, in 1982, was added to the tentative list of UNESCO World Heritage sites.

Nowadays, the church made of grey stones stands several meters below the ground and is surrounded by well-kept gardens. The interior walls of the church feature frescoes depicting the life of St. Nicholas and some of his wonders. There are several sarcophagi in the burial chamber of the church. The stone sarcophagi decorated with acanthus leaves and fish scales is believed to be the tomb of St. Nicholas.

There are also several modern-day statues portraying the many faces of St. Nicholas including his roles as priest and bishop, Father Christmas, and Santa Claus in the surrounding area of the church. Today, the church serves as a pilgrimage site for Orthodox Christians and as a museum for many.

Every year on December 6, on the day of St. Nicholas, gatherings and religious ceremonies are organized for the commemoration of St. Nicholas and praying. Russian pilgrims especially show great interest in these gatherings and some of them even decide to settle in Antalya, Demre or in other towns and districts of Antalya to be closer to this sacred place.

How to Get to the St. Nicholas Church?

St. Nicholas Church can be easily accessed by walking from the center of Demre. To get to the center of Demre District, you can take a bus from the Intercity Bus Station of Antalya. The district center is only 140 km from Antalya city center. Also, you can prefer taxis or renting a car for a more comfortable ride.